Port Stephens Council has approved over $7 million of funding to repair damage to infrastructure caused by the natural disaster event in March this year. 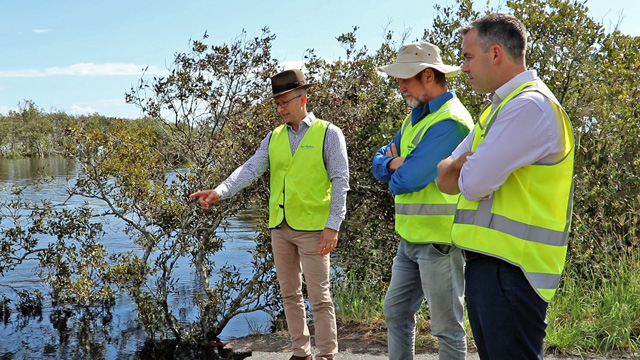 The funds will go towards fixing Foreshore Drive and a number of land slips across Port Stephens as well as drainage works, road works and flood pumps.

At the Council meeting tonight, Councillors also endorsed a Mayoral Minute by Ryan Palmer for a further $3 million to go directly toward rehabilitating Port Stephens roads. This will be funded by Council’s property sales.

“It’s time to fix our roads. The Special Rate Variation was our chance to do this — we weren’t successful, but we have to find a way to deliver better roads for our community.

“This is our chance to deliver the quality roads I know our community expects and that it deserves.

“Our roads were already in need of repair and the March disaster caused further widespread damage across Port Stephens and affected many people — some are still recovering months later and I really feel for them.

“With this decision our crews have the funding they need to get on with the job of fixing the paths, roads and drainage to the level our community expect.

“I want to thank everyone for your ongoing patience as we get to all these jobs,” Mayor Palmer said.

“This weather event was unprecedented, with intense rainfall causing flooding all along the east coast of Australia.

“We’re one of many places in NSW that has been declared a natural disaster area. This declaration allows us to seek contributions from the NSW Government to repair critical assets like roads, drains and footpaths.

“During the disaster, we undertook immediate emergency works to repair assets and bring them back to an acceptable standard. We know there’s still a lot of works to be done and we’re in the process of pricing these to claim natural disaster funding.

“We’ll now look at our existing program of major projects to prioritise these repairs so that we can get our assets back to a safe and reliable standard for our community,” he said.

Kable said many emergency works had already been completed or were underway.

“Our crews have fixed damage at Kallaroo Road and Corlette Point Road. We have also fixed pumps at Anna Bay and Stockton Ponds, which held up during the last downpour over the weekend.

“Drainage works are also underway at Ajax and Achilles streets in Nelson Bay.”

Kable said Foreshore Drive remains a priority and a fix is on the way.

“We’ve ordered a replacement structure that will allow for cars, bikes and pedestrians. We’re also out for tender for the installation of the structure, with the aim to have works completed by the end of 2021.”

Kable said assessments have progressed at landslips at Marine Drive Fingal Bay and 2 others at Teramby Road Nelson Bay.

“Our team has undertaken a number of surveys and assessments at these land slips — we’ve now developed a concept for immediate and long-term fixes for these sites.

“Our number one priority is the slip at the end of Teramby Road, and we’re working closely with the business owner who’s been affected since the storm first hit.”

Funds will be allocated to:

To stay up to date on the projects, visit portstephens.nsw.gov.au/projects